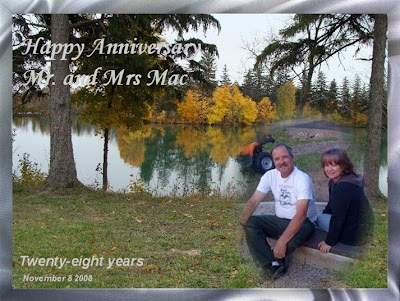 Another year gone by and already another anniversary for such a special couple!
Happy Anniversary dearest Mrs. Mac to you and your special sweetheart,
Bernie and I hope that you have a great day!
With all of our love and our thanks to you for being such great friends..Love Bernie and Terry

Dear Mrs. Mac...This is the song that you were singing all of the time when you were working on "this new house" and you were waiting for your darling to come home!!..Love Terry

Dear Mrs. Mac,
a happy anniversary week-end from me too.
From Felisol

Ha, Miss Terry, Mr.Mac was probably singing this song 'cuz he 'had to wait for me' (I was in fifth grade when he graduated high school ;) he robbed the cradle ;) ...I've always been the more mature one ... he's been dubbed "Peter Pan" ...

Thanks for your wishes from north of the boarder.

Ha! Mrs Mac John was more of a cradle robber,
He is 11 years older than Betty and only seven years younger than Mom Golden

Love that song Ms Terry. Heard it after a long time.