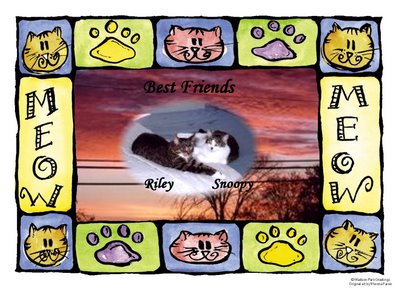 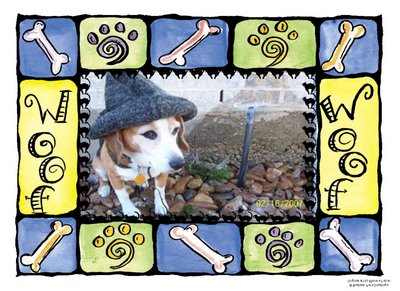 Oh dear!
I have to work tomorrow and was all set to go to bed when three visitors arrived at my house.
Snoopy and Riley, sons of Goldwings were knocking loudly at the door and when I went to let them in, right behind them walked Adi, Jimmie's adopted grandaughter.
As you can see Adi came dressed for the cold Canadian winter.
But alas!
Those two "bestest friends" kitties DID NOT!!
Not to worry though!
In their suitcase I found a warm sunrise that their mama had wrapped in a warm blue blanket and sent along with them.
So I put them right into it where immediately they were warmed and feeling quite at home!
I really don't know how long they will able to stay.
Mr. Bernie and me are being overrun by cats!
We have to entertain them and feed them and do all of their laundry!
And not to mention, there is now a doggie in the midst!

Shopping News has a nose that is ALL of joint!!

Amber is waiting to go back to her mother, Karen and misses her grandpa Jimmie sorely.
Maybe that Adi will escort her back with her two new friends Snoopy and Riley.

Well they have all had their warm milk and a cat treat.
Yes! Adi had to have a cat treat too because we are just not equipped for dogs but she didn't seem to mind!

And so it is off to bed with us all.........Good night Snoopy! Good night Riley!
Good night Adi! Good night Jimmie and Karen! Good night Goldwings!
And if there is a "John" out there too...'Good Night John Boy!! 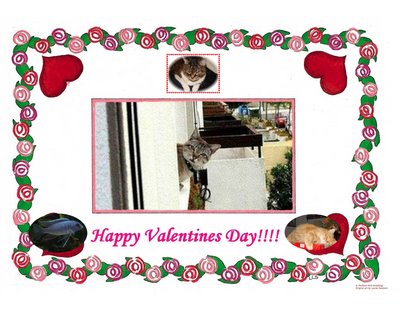 I found this "peeping Tom" on my good friend, Sioux's blog this morning and thought I would put him to work wishing everyone of you a "Happy Valentines Day!"

As you can see there is a tiny picture of Bernie's cat, "Shopping News" at the very top and if Bernie complains that it is too small,or not properly centered, I will just tell him that he and his spoiled little buddy will just have to create their own blog site! 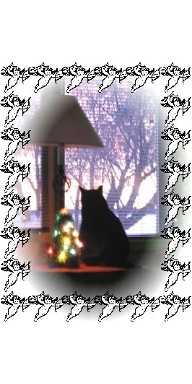 This graceful kitty sitting quietly on the table and gazing out of the window is Saija and Leo's shy cat, "Fearless Feline".

Valentines Day?
Well this kitty can take it or leave it but it is quite obvious here that this darling cat prefers CHRISTMAS and is already waiting and watching for its return! 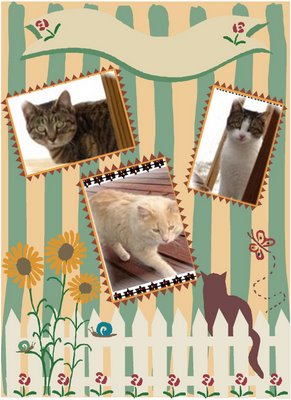 Now these cats, belonging to Amanda[amandasplanet]are not one bit interested in Valentines Day..
They are fierce hunters and have a real desire to go rabbit hunting and that is exactly why I put them into a frame.
I am kind of partial to bunnies...LIVING ones!
Oh yes they do have cute names alright..."Stray", "Skat" and "Junior". 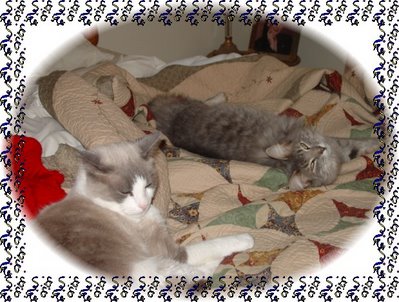 Sad indeed is the sight of these two!
Sandy's son, "Simon" and Simon's new sister, "Annie"[with an "e"] prefer to watch re-runs of the Super Bowl,and dine on kitty snacks rather then celebrating sweethearts day!
Hmm... Don't they just remind you of an old married couple?! 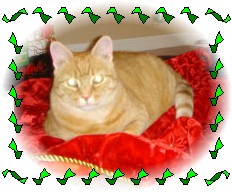 This pretty little red-head likes Christmas too but she is all for Valentines Day and has chosen a nice red blanket to lie on.
She is Jimmie's granddaughter and sister to Adi.
Her mother's name is Karen.
She is a little tired because of having to fly in the snow storms that Mrs. Mac had put in a BIG order for.
By the time she reached the Canadian border she was one frozen kitty!!

Now this handsome cat is "Jake".
He lives with Turtle and they both belong to the Sioux family.
His nose has been out of joint ever since that Turtle came into the family!

Valentines? Ha!!
None of that for him!

Well Mr. Jake, maybe if you gave your mom and dad a nice card then you might just be in the inner circle again!
No sense in sulking all by yourself in the field, where even the mice won't have anything to do with you! 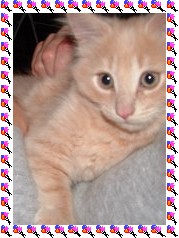 Now we have already met "Jack", Lauren-mary's own little valentine.
He is a mild mannered cat when his mother is around and behaves, himself quite well but when Lauren-mary took a long awaited trip to Ottawa this Christmas , the babysitter had one tremendous job of keeping him from climbing the Christmas tree!! 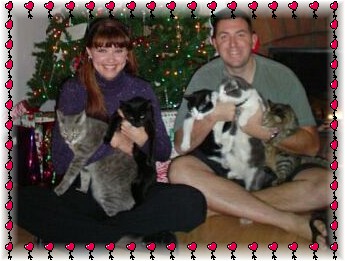 Now this is quite a number of cats, so I thought that I would get Jeanette and Tony to look after this wild bunch.
Otherwise, no telling what mischief these cats would be getting into!

Here they are with their own little family of kitties...
Now I do hope I get all of the names correctly.
Left to right;
"Bug", Jeanette, "Snug", "Ripper", Tony, "Slasher" and "Tug".

Have a happy rest of the Valentines Day everybody........Love Bernie and Terry and "Shopper" xoxoxo

Have A Good Trip David Fisher! 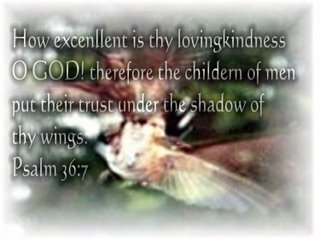 I just got home and on my answering machine was a triumphant message from ALL of our friend, David!
He was on his way to the Buffalo airport to take the plane to Florida!

He says that he is feeling better than he has in weeks and he wants to thank EVERYONE of his dear friends for praying for him!

I rushed right away down to Jel's and took this lovely verse from her Sunshine blog...

I am in a rush to post this because that David sure enough is heading to Florida but he is also sure enough leaving one big snow storm behind him and I sure don't want a power failure before THIS good news is spread abroad!


Pilgrim David.."Fish" [nick named by by Julie.."sweetinspirations"] is on his way to FLORIDA!!

Thank you all the other Connections too!... 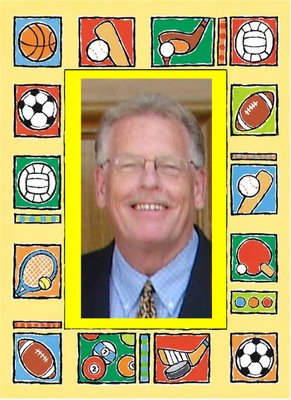 This is a picture of a happy man!
Happy, because he is born again and a true man of God.
Happy because he loves sports and was for many years a chaplain for many professional athletes.
He has witnessed to everyone of these athletes who he has come in contact with, the saving power of the Lord Jesus Christ.

I received an email from David Fisher today which asked me to tell the "Fisher Connection" to pray for him, as he has been very ill for the last few days.
I would also like to ask the "Sandy Connection", the "Jessica Connection", the "Curious Servant Connection", shucks!!!..Just the "WHOLE CHRISTIAN Connection" and "Fellow Pilgrims Connection" of us ALL to pray for this man who is such an encouragement to so many of us!
He is the David of the "barnabasblog"!

Sadly, David might have to cancel a trip to Florida that he was planning, but sadder still is that a dream that he has had for over fifty years to go to Bristow, England will be shattered.
He has longed to go to see the orphanage buildings that his hero, George Muller had created for the poor homeless boys and girls in England.
You can read all about this in David's excellent "George Muller" blog.

As many of you know, I am very computer illiterate and do not know how to copy and paste, so what I am going to do is write out David's own posting of this dream that, Lord willing, is in his future.
In fact it is February 27 that he has booked the plane for. 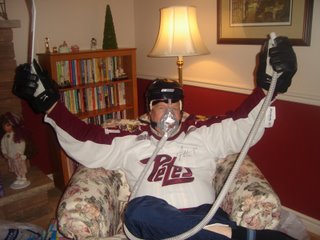 Now, David Fisher of pilgrimscribblings in his own words; 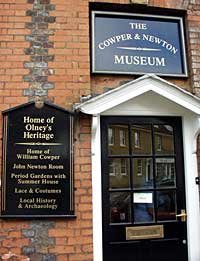 The Ticket Is Paid For


Well friends,I did it! I bought my ticket for London, England, and will fly February 27th, Lord willing, to Gatwick airport to begin 8-9 days of reliving history.

I've dreamed of this day for over 50 years and now it's coming to pass!

One of the highlights will be a trip from London to Olney to see the Cowper/Newton Museum.
Of course John Newton wrote the famed hymn, Amazing Grace and William Cowper[pronounced "Cooper"] wrote "There Is A Fountain Filled With Blood", which is my top ten of all time favorite hymns.

Thanks for your prayers as I plan this trip. I'll be blogging throughout my travels to keep you up to date on what I'm experiencing. Hopefully you'll vicariously take the trip with me.

Oh... just to write this out and NOT just to read it, how I feel David's longing!!