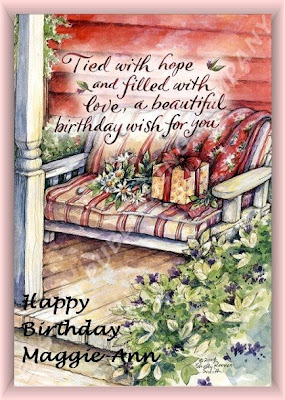 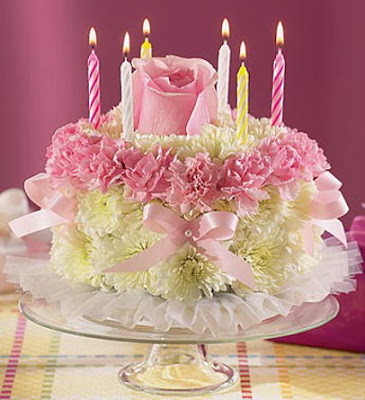 Trish....This Song Is For You!

I will have to apologize to Trish http://trishandrews.blogspot.com/ for swiping this post from her blog.
For sure and she is my sister, so she won't mind, eh?
This post has been such an encouragement to me and I know whoever reads it will be blessed by it too!

Dearest Trish.. I am dedicating this song to you!...Love Terry

Our weather is snowy and cold. Believe me, I am not complaining...I love the snow.
And this bitter cold that is upon us...Brrr! I am still not complaining...no, nope, nada, no siree bob! Ain't gonna do it.
We had to drop our car off at the dealership on Monday morning to have the brakes checked out. Everything was fine, nothing wrong. Thank the Lord!
But that's just the beginning of this story... what I need you to know is that it was not by chance when dropping off the car on Monday, that I spotted an elderly lady walking from McDonalds (next to dealership) with a super large carry out bag. The snow so deep after our weekend snowfall, that she had to walk in the ruts of the snow covered road, to make her way back to the Senior Apartments nearby. Oh, My soul cried out "thank you Lord, for this warm car I'm in." And "Bless her Lord" for judging by the size of that bag she is carrying, she is taking meals for several others, not just herself. What strength, what determination.
So, this afternoon, another snowy, cold and messy day. Tomer and I made our way back to the dealership to pick up the car. Not complaining! I am once again sitting in the parking lot and am waiting for my car. When I look up and just ahead, I see him. A middle aged man in a blaze orange stocking cap. He is making his way from that same McDonald's. But lo and behold...he is buzzing by in a motorized wheel chair! I am amazed, he cannot walk, it is snowing and our temperatures are in single digits. No, he is not letting it keep him in. He is living life. Wow!
I wonder if given the same circumstances, how I would react?
Would I get on with life...trudging through the drifts that pile up before me? Or...would I whine and complain...Poor, poor, pitiful me and stay stagnate, never growing?
I am so deeply touched by two people who have unknowingly crossed my path. They have left a profound impression. One that I pray God brings to mind everytime I even think about complaining.
Forgive me Lord? Oh, and bless me with just a little of their determination! And please extend my view...may my eyes be open to Your lessons in everyday life?
Simple lessons in the snow...I don't think so. It is proof that if we choose... we will continue to grow.
Love to all!
Trish
Posted by Terry at 11:17 pm 9 comments: Links to this post 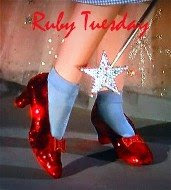 Mary,our Teach wanted us to take some macro shots for this Ruby Tuesday and after I learned from Betty and Bernie what this meant, I have included a few macro pictures that were taken of Bernie's pride and joy, his ktty, "Shopping News". 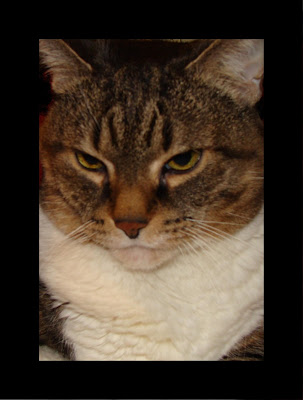 This is Shopping News and he has been in some black mood, complaining almost daily that he is being ignored and that his cousin dogs, Furry Fluff and DD and Daisy and Columbo have been getting all the attention with never a mention of his kitty name! 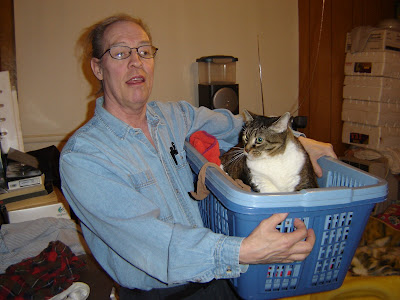 We tried to console him!
Daddy Bernie gave him rides! 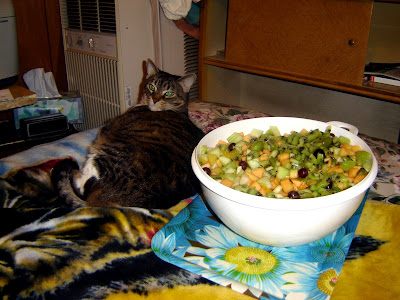 I offered him gifts of food, a beautiful fruit salad which he turned up his bent out of shape nose at! 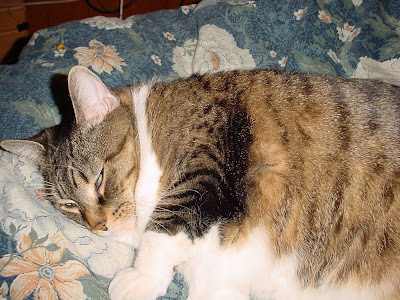 NO! He just would not be comforted. He continued to give me only dirty looks!
For sure and he was trying to put me on a guilt trip! 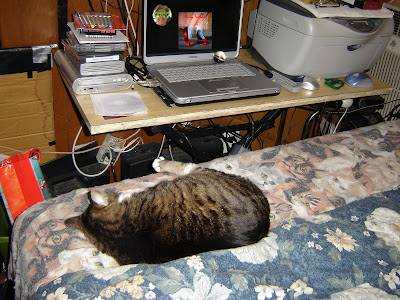 He looked longingly at the Teach's Ruby Tuesday blog.
I finally relented and told him, "OK, you spoiled and "jealous of your cousins" kitty I will make a post for you!" 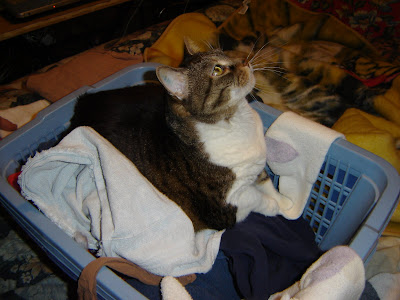 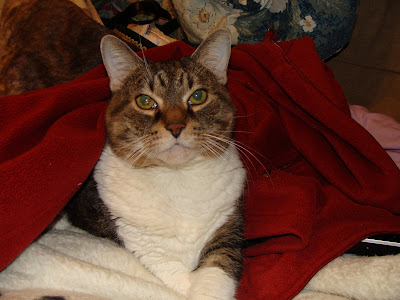 What was a person to do, eh?
I put the ruby red robe on him and told him to smile for the camera.
For sure and that sure is some poor excuse of a smile! 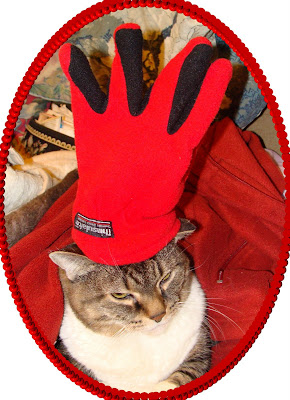 And then he had the nerve to ask for a crown.
Just because DD had been crowned, he wanted one TOO!
So crown him, I did.
I just planted one of my dollar store ruby gloves on his ungrateful head and snapped a macro shot picture of him!
"NOW, he said, "Tell them bloggers my story!"[very bad English King Tut!]
So here it is folks!

One morning when I was about to take my husband, Bernie, to work, I noticed a meowing coming from somewhere in the car. We looked under the hood of the car and nothing. Bernie thought I was just hearing things, so we got into the car and proceeded to drive. As soon as we had driven around the corner, I told Bernie, "I STILL hear it!" We stopped right away at the side of the road, and by this time Bernie heard the same meowing!
Bernie promptly got out and shoved himself under the car. He started to explore. To his amazement he saw a small, skinny tail dangling from just under the muffler. He tried gently to give the tail a pull, with no results. There was nothing to be done, but to give that tail a ruthless yank, and with that mighty pull out came a kitten! Somehow that little jigger had gotten himself on top of the muffler and had been trapped and couldn't get himself out!
Well!!!
Just then a guy that Bernie worked with came by and yelled, "Bernie, you don't drive to work under the car! You get into the car!" With that he told Bernie he would drive him to work, and guess who got stuck looking after that kitten? Well I took him home and stuffed him into the bathroom with a litter box and a dish of food and shut the door. After all, I had a paper route to be delivered that morning. No time to be playing with stray cats! The paper I was delivering was the "Shopping News." Therefore that cat became "Shopping News"—“Shopper” for short, and ever since that day Shopper has been Bernie's boss. And my big black cat, "Sir Galahad" became Shopper’s boss. And as for me? I’m no longer a boss--I have become a referee for the three of them!

PS: Shopping News is now about ten years old and my Sir Galahad died at the ago of 16, two years ago,

And now here are two pictures of MY pride and joy! Sir Galahad!!! 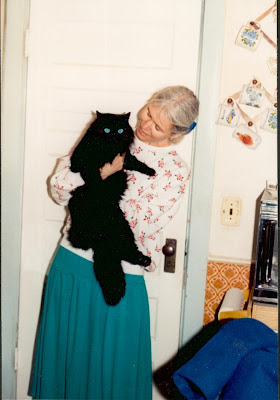 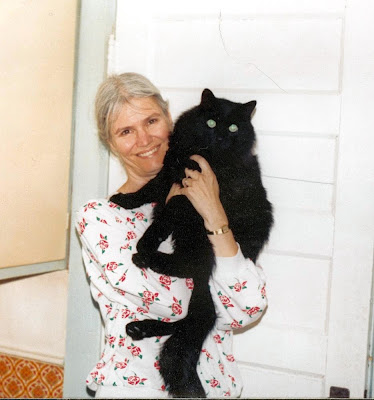 God bless you all and have a Happy Ruby Tuesday.......Love Terry 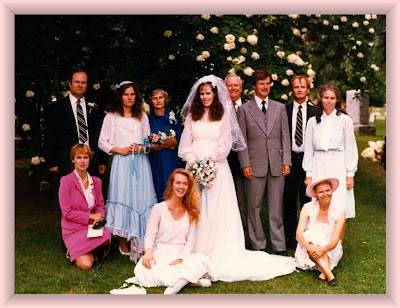 Today at Mom and Dad Golden's, we watched a little slide video show that was put into a picture frame. It was given to Mom and Dad Golden for Christmas.
It brought back so many memories.
Here is one of the pictures.
This was taken at Gail and Ross's wedding and this is a rare picture, where every one of the nine children and Mom and Dad Golden are together.
I have a little bit of a sad feeling today because, as you know Dad Golden is 82 and still not ready for heaven.
David, who is standing next to Gail has been gone to heaven already 11 years and Gracey, who is standing on the other side of Gail, well her dear husband, Eric had left for heaven over twenty years now.
So many of my blog friends from all over the world; Canada, United States, Norway, India, Malaysia and now Philippines have been praying faithfully for Dad Golden every day.
Every day, I hope that THIS will be the day that he will trust in the Lord!
This song here," Suppertime" always makes me cry..
Thanks for the picture Gail and thank you all my blogger friends for praying for my Dad Golden...Love Terry

In the picture ;
Beautiful baby sister, Karen is sitting in the front.
Sitting, wearing the stunning pink suit is compassionate Sandra..fifth child....mother of one child.
Sitting on the left...guess who?
Back row left to right.
Trust worthy Ted...faithful brother,...third child.. Father of five children
Gentle Gracey, sixth child...mother of four children who she raised with courage and principles and Gods word....Gramma to three children.
Of course our cameo Mom Golden...Ha! raised us with kindness but did NOT spare the rod!
Frail Gail, the lovely bride ....seventh child, now wife and mother of three great kids.
Dad Golden, peeking through, always shy and such a faithful husband and good provider for his children.
Our beloved David...eighth child. Mom and Dad Golden and all of us miss him dearly.
Generous Gary, fourth child, not rich by any means but generous with his time. always there when he is needed....Father to five children, Grampa to one.
Reliable and sweet Betty, the oldest and always the one that keeps the family together even when she was deathly sick herself.She is the mother hen!....wife and mother of five children.