Saija Of The Manitoba Prairies 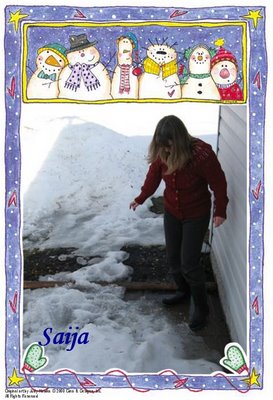 I just received this in my email.

It appears with the 50 degree weather that they are experiencing in my beloved Manitoba, "Saija's Country", that our girl is trying to melt the snow even faster by stomping on it or perhaps she is going to make herself a snow man?

I just thought I had better grab this picture before that David Fisher scoops it up for his own blog.."Pilgrim Scribblings".

It is surely a winner, this picture, and it was taken by none other than Saija's own sweetheart Leo.

For sure and this is NOT the posting I had in mind for my next one but I thought, as I said, that if the Pilgrim DOES swipe one of Saija's pictures, he will have to take and then post the one that Saija, herself shot of a guy playing golf on the skating rink dressed in SHORTS!!

You can find Saija on "Thro'a Glass Darkly".
Posted by Terry at 5:58 pm 20 comments: Links to this post