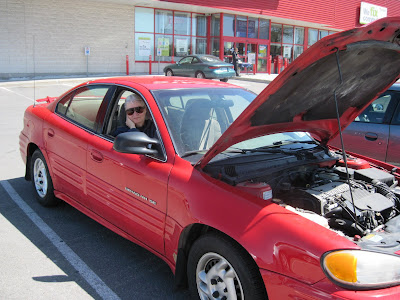 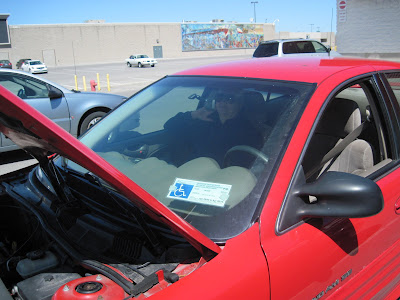 it had truly become handicapped! 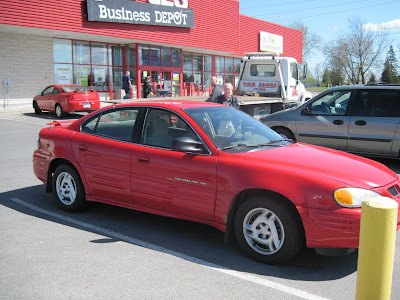 a tow truck had to be called and after a two hour wait, it finally arrived. 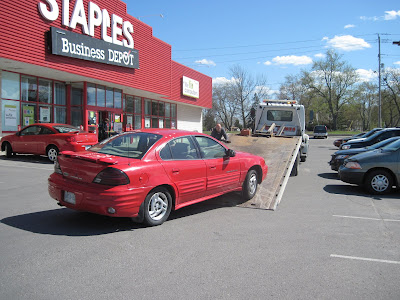 the little red car had to be coaxed into the ambulance but.. 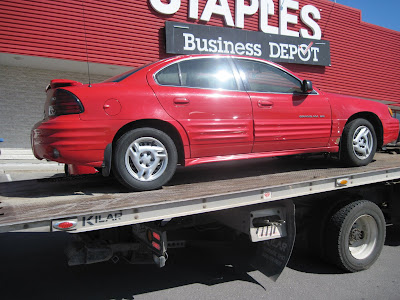 finally there it was standing proud with its windows just a twinkling in the bright sun rays. 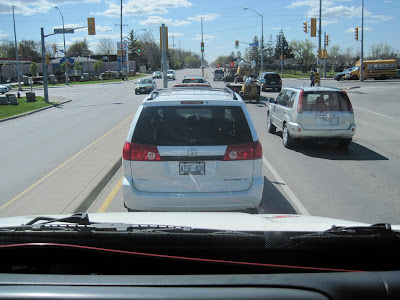 the tow truck man kindly let me take some pictures as bernie and i sat with him in the cab. 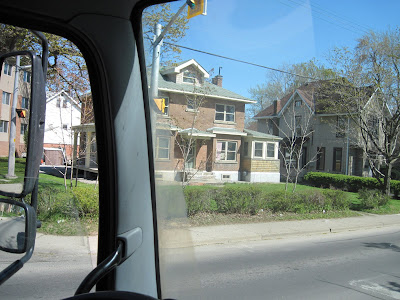 we passed our old homestead on niagara street. this was the house bernie and i lived in 35 years ago.! 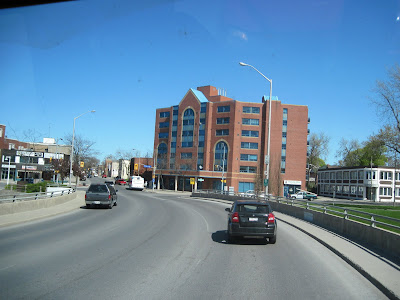 as we travelled on the bridge, i snapped this picture of one of welland's newest apartment building. 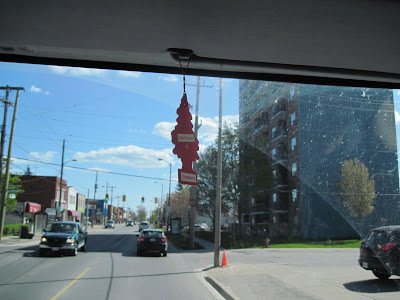 the camera's eye caught a sight of the red pine tree refresher dangling from the cab's ceiling. 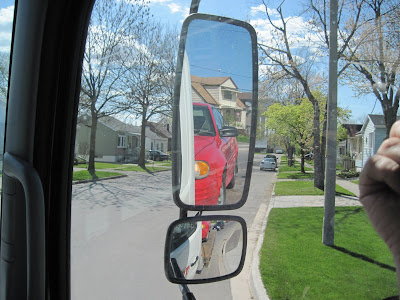 and here it catches a glimpse of the little red car admiring itself in TWO mirrors! 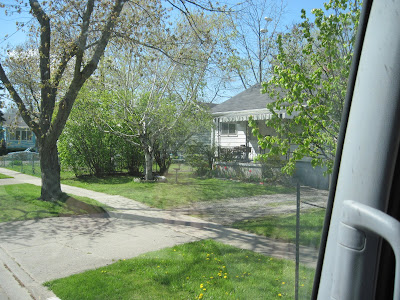 this is the street where bernie and i and the little red car live. 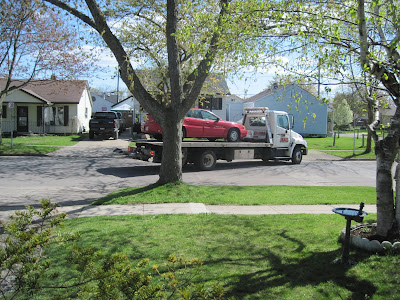 mr. tom is backing up his truck that is loaded with one naughty, REFUSING TO START car! 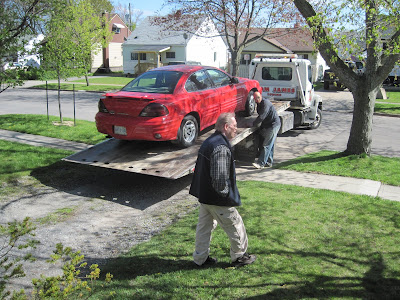 it is causing a little excitement on the usually quiet street. 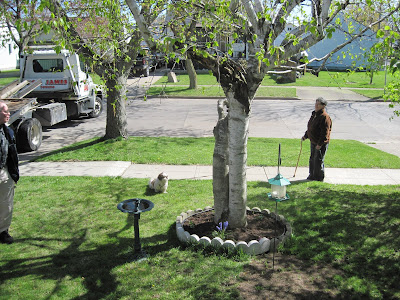 our next door neighbor, grace and her little cute doggie seem very interested at what is going on. time to get down from your high perch little red car! 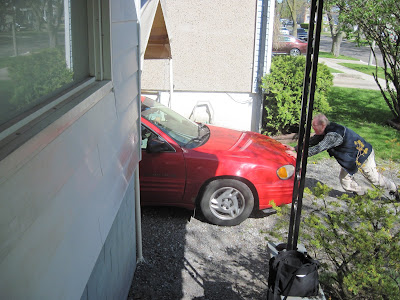 "you have been one bad guy little red car...you are being grounded...get back there!", says bernie. 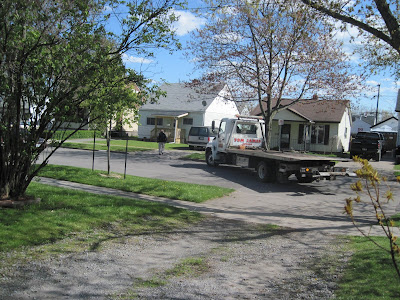 goodbye mr. tom..thanks for all of your help.

do you notice in the drive way across the street that a sunday school van is waiting patiently to go out for a little run? 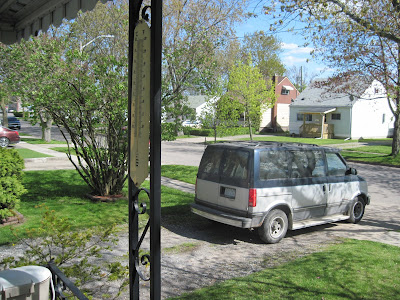 "ha ha little red car, i am tired of playing second fiddle to you! back of the line you!"says the big blue van. 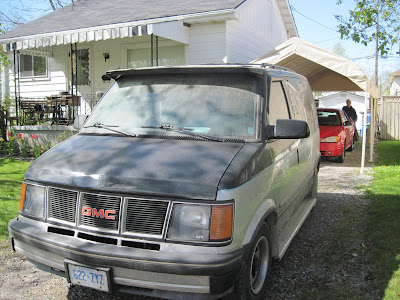 HA..what do you think about THAT, eh?" 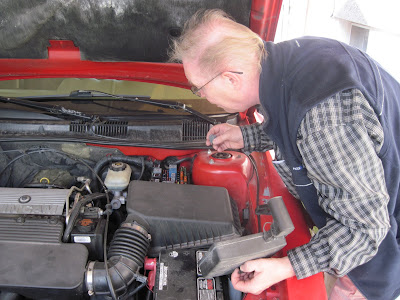 for two days bernie worked to find what was ailing the little red car, while in between times, the sunday school van took us to anywhere we wished to go. it even took us out to the special gospel meetings, although i must say, i missed wednesday night because all the excitement on wednesday made me so tired! 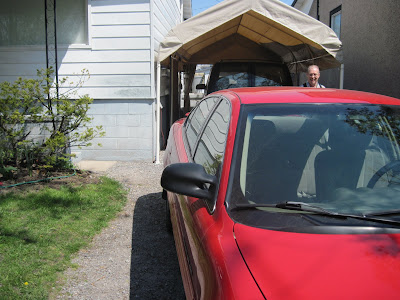 bernie could not find out what was wrong with the little red car.
he replaced the fuel filter and the pump relay ..and still it REFUSED to start!
then i got one bright idea, "hey bernie, the fuel gage DOES say that you have a quarter tank...but hey, what have we got to lose? why not put ten liters of your lawn mower gas into its red tummy?"
he did just that and guess what? 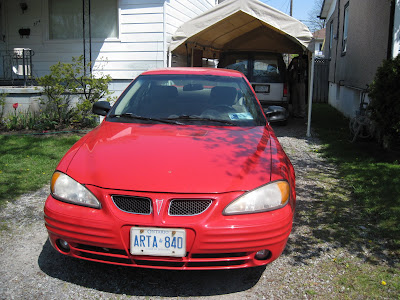 the little red car started right up and was soon the big cheese again in the shirkie family..
"back to the back with you big blue van!.it is my turn again to carry the bosses around here and there!" said the little red car.

postscript..what was wrong, we finally learned was that the sending unit that keeps the gauge in line is broken and so we will just have to keep an eye on our millage and put gas in every 400 kilometers...

i hope everyone had a happy ruby tuesday..it is five after midnight wednesday here in southern ontario....god bless you....love terry

Heaven, Our Future Home Even More Lovely Than This!

have a blessed lord's day....love terry
Posted by Terry at 12:36 am 4 comments: Links to this post