More Of What Grandpaw Ron Said

Hebrews 11:1 and passing-thru thanks for your comments , but I would like to add something .
When I was very young and kinda poor but rich in family love I was taught to be blessed with what I recieved in life ! I was taught to want what was mine but to always give back what was not mine ? When my kids mom and I raised our children around the house, my kids, my wife and I could lay money , the kids could set a bag of candy - or whatever was yours on the fireplace mantle or bedroom dresser and if it laid there 3 weeks , when you went back to get it , it was always there ! This is not wrote to condemn anyone but there is not enough taught to respect what belongs to others ?
I thank God everyday because my kids are living that every day in their lives !
I know that I'm a truly Blessed man !

Blessings to you all.
Ps - I didn't mean to ramble to long !
Ron.

Words Of Wisdom From Grandpaw Ron 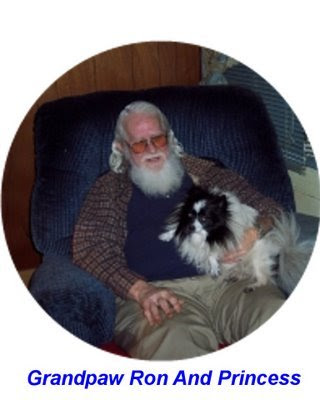 this was a post that my grandpaw ron sent to us over at pilgrim pals a while back and i thought it worth putting it here......grandpaw ron has been ill and has been in a hospital home for several weeks because of a bad fall....grandpaw ron lives the way that this post is written and even though he is having bad days, the people around him will surely realize what a great christian man he is....bernie and i miss him so much!

"Its not what you gather in life, but what you scatter that tells what kind of life you have lived “.
Several years ago , a preacher from out-of-state accepted a call to a church in Houston, Texas. Some weeks after he arrived, he had the opportunityto ride the bus from his home to the downtown area.
When he sat down he discovered that the driver had accidently given him a quarter too much in change.
As he considered what to do , he thought to himself, “you’d better give the quarter back It would be wrong to keep it. ” Then he thought , ” Oh, forget it, its only a quarter. Who would worry about this little amount anyway, and the bus company gets too much fare allready, they will nevermiss it. Accept it as a gift from God and keep quiet.”
When his stop came, he paused momentarily at the door, then he handed the quarter to the driver and said,” Here you gave me too much change. “
The driver, with a smile , replied, “Aren’t you the new preacher in town? I have been thinking a lot lately about going somewhere to worship. I just wanted to see what you would do if I gave you to much change. I’ll see you at church on Sunday. “
When the preacher stepped off the bus , he literally grabbed the nearest light pole, held on, and said,.
“Oh God I almost sold your SON for a quarter .”
Our lives are the only Bible some people will ever read. This is a really scary example of how much people watch us as Christains and will put us to the test ! Always be on guard–and remember–You carry the name of Christ on your shoulders when you call yourself “Christian.”
” Watch your thoughts, they become words. Watch your words; they become actions. Watch your actions; they become habits.Watch your habits; they become character. Watch your character; it becomes your destiny.”
The moral is ” We will not be remembered by our words , but by our kind deeds.”
Blessings to all. Ron."
Posted by Terry at 4:14 am 4 comments: Links to this post