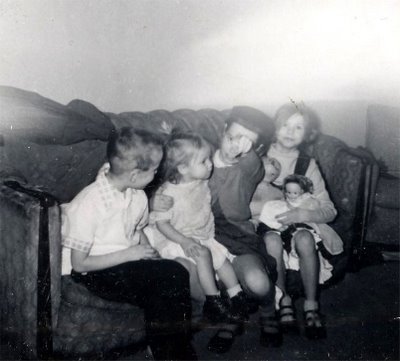 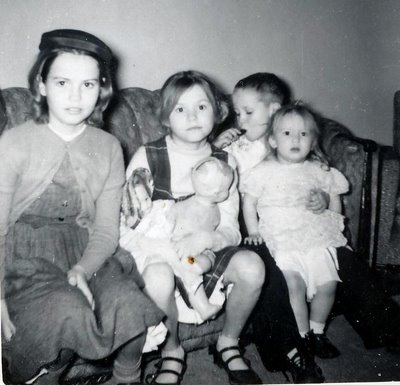 Well it is rather late at night but I was going through some of my mom's old photo albums and scanning pictures.

I came across these two pictures taken of four "Golden" children...Golden in name only...certainly NOT Golden in behaviour, with the one exception of oldest sister, Betty... She NEVER misbehaved!
That is her pointing at the camera and telling us all to say "cheese"...So prim and proper she is with her litte hat.

Meanwhile there sits Terrible Terry hugging her two ragged dolls closely. One shows early signs of baldness [and WHAT?... No clothes!!!] while the other dolly is like her Aunt Betty, nicely dressed hat and all!! Hmm.. It DOES seem strange that I look like the motherly type and yet of these four children, I am the only one that never BECAME a mother. The other three in these pictures had 10 children between them!

That bald doll was likely scalloped by brother Gary who for some strange reason is missing in this picture. Probably off getting into trouble somewhere!!Trouble was that boy's middle name! And Trouble is STILL his middle name!

It looks like brother Teddy is enjoying one of those liquorice cigars that we used to be able to buy in the "olden days".

Baby sister Sandra[she WAS the baby then], sits on Teddy's lap in one picture and in the other photo sits with Betty's arm around her.Betty was always the little mother.

All in all a cute little group but the terrors of the neighborhood...with the one lonely exception, as I mentioned before of Betty the little lady and the perfect little mother!!

The seven of us brothers and sisters[little brother, David is in heaven] to this day still love her dearly!!!
Posted by Terry at 3:48 am 6 comments: Links to this post