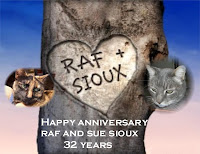 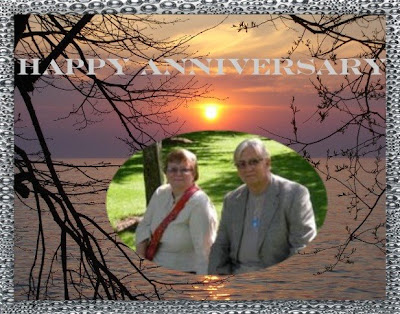 on may 5th our good friends raf and sioux sue celebrated their 32nd anniversary and so, although it is two days late we want to wish them a very happy belated anniversary.
i have put them into a beautiful lake ontario sunset but alas the trees are not so beautiful!
they are still undressed and are waiting for the tiny buds to grow into leaves!
in the picture where raf has carved his and his sweetheart's initials are two cats guarding it.
the kitties names are gus and turtle.
turtle is raf's pride and joy but sioux sue loves all three of her cats.
their other cat, jake refused to come back to canada again because he feels that he was thoroughly snubbed by grandpaw ron's daughter, princess and i am sure he was!
adi and amber, mr. jim's grandaughters have escorted turtle and jake over a couple of times to canada to visit bernie and me and shopper and various other blogger pets. 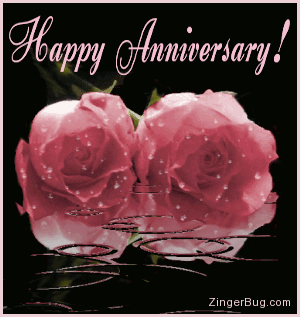 once again raf and sweet sue...happy anniversary.
nat king cole is now going to sing a nice romantic love song to you guys!.....
love bernie and terry and the shop.

Posted by Terry at 7:58 pm 7 comments: Links to this post

http://omaakameme.blogspot.com/
Posted by Terry at 6:44 pm 3 comments: Links to this post

pink tulip trees on a sunny at last! ruby tuesday 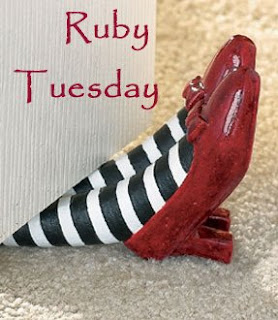 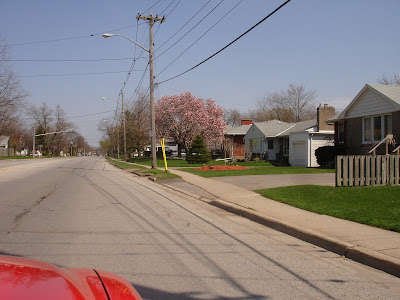 on a bright sunny day this week, bernie and i and the little red car set out on a search for some red flowers, which indeed are really hard to find this cold spring!.
much to our delight we spotted this tree full of pink blossoms down lincoln street! 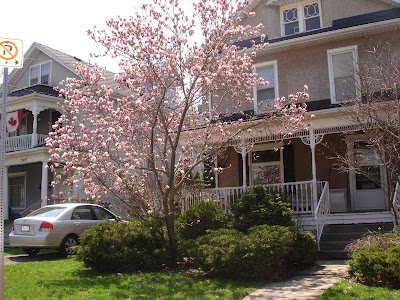 now this tree was dressed in such a thin dress and even though i did snap a picture of it, we decided we would have to continue to look for one that had a little more style!
taking this picture was no loss though because on niagara street, which is one of the oldest streets in welland there are such classy old houses! 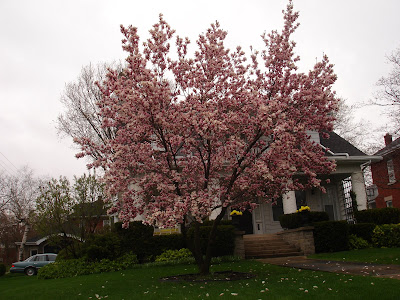 now this was more like it!
on fitch street we found this glorious blossoming tree and although it is a bit on the dark side, the photo doesn't look too bad. 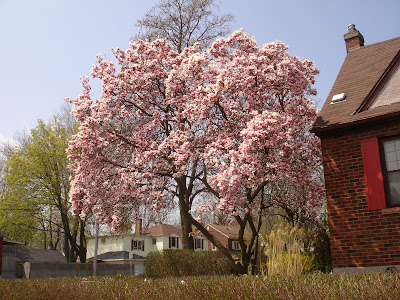 and this was MORE than more like it.
this lovely amply dressed tree is standing beside a red bricked house that has ruby shutters!
how can you beat this house on parkdale and this large pink bouquet for a nice ruby tuesday picture! 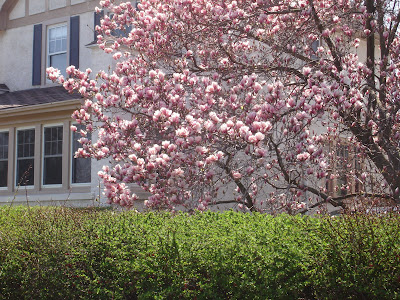 now i will tell you the name of this tree.
ever since the golden kids were little, they always called it a tulip tree because don't you think that the flowers look like great big tulips that have decided to escape the ground and fly into a high tree.....lots more fun to abiding with the birds and living so close to the sun?!
the real name of this tree is a magnolia tree.


Psalm 96:12
Let the field be joyful, and all that is therein: then shall all the trees of the wood rejoice
Posted by Terry at 8:51 pm 14 comments: Links to this post

For Amrita and Mama

love terry
Posted by Terry at 6:45 pm 4 comments: Links to this post