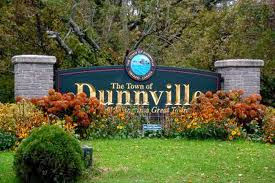 this monday, the weather was so mild and the trees were showing their golden beauty, and so bernie and i decided to drive to dunnville...the place of mom golden and her first three children, betty jane, me and teddy were born....about 30 miles from welland. the little red car of course had his nose WAY out of joint..."fourteen years i have served you and now that black suv just takes right over!" as we drove on the smooth road to dunnville, bernie had his favourite music on..now usually we have southern gospel playing but listening to those great love stories from the past so many memories flooded my heart. when we lived in my beloved manitoba, the hit parade was only on from four o'clock til four thirty..in those days mom golden wouldn't let us listen to the radio..sometimes betty and i would sneak it into our bedroom to listen to the hit parade...keeping it low!...i especially liked to listen to bobby vinton....many years later mom golden was a little apologetic to us for her being too strict..she even told me once, "you know terry, that bobby vinton sure does have a nice voice and he sings nice songs...i had nothing to forgive mom golden because i understood..ha!...sometimes when i have the computer on at her place, she and dad golden just love it when i put you tube on and play the love songs from their generation and it is so neat the way that they remember all the words!...they sing like teenagers! anyways, like i was saying, it was a real enjoying day as we drove and the radio sang those sweet old songs. i am putting this one here for bernie...it is a great song! hope you like it too...god bless you!...love terry

Posted by Terry at 1:05 am 2 comments: Links to this post