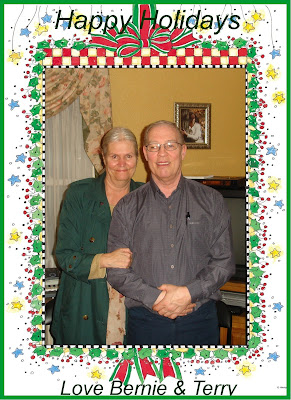 bernie and i send all of our best wishes to you all..so many blog friends and all of your families...may god richly bless you as you celebrate, not only the coming into the world of the lord jesus but also keeping in mind WHY he came...to die for us and pay for our sins with his own blood and finally to take us to heaven if we do receive his wonderful gift of love.........love bernie and terry


i received this letter a couple of days ago from my dearest friend and i am going to copy a portion of it for you to read..i am sure that felisol and gunnar and serina will not mind.

"Yesterday Gunnar’s aunt Lilly died, while we were visiting.
She had been weakening for a month, and died peacefully. She meant so much to our small family, and she had this giant heart with a place for us as well as her children, grandchildren, great-grandchildren and great great grandchildren.
Now we are feeling a bit empty and lost even though she was saved and I was allowed to wish her a good journey to heaven." 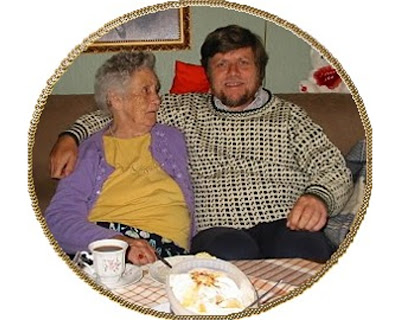 here is gunnar and his dearest aunt lilly who he and felisol and serina were forever visiting.
and here is a lovely poem that i am dedicating to them

I see the countless Christmas trees
Around the world below
With tiny light, like Heaven´s Stars
Reflecting on the snow.

The sight is so spectacular,
Please, wipe away that tear,
For I am spending Christmas
With Jesus Christ this year.

I hear the many Christmas Songs
That people hold so dear.
But, the sounds of music can´t compare
With the Christmas Choir up here.

I have no words to tell you
Of the Joy their voices bring
For it is beyond description
To hear the Angels sing.

I know, how much you miss me,
I see the pain inside your heart,
For I am spending Christmas
With Jesus Christ this year.

I can´t tell you of the splendor
Or the Peace here in this place.
Can you just imagine Christmas
With our Saviour face to face??

I´ll ask Him to lift your spirit
As I tell Him of your love,
So then, Pray for one another,
As you lift your eyes above.

Please, let your hearts be joyful
And let your spirit sing,
For I am spending Christmas in Heaven
And I am walking with the KING.

please pray for our precious norwegian family as they prepare for the funeral being held the 26th or 27th and they celebrate aunt lilly's life and say their farewells for now.
it will NOT be a final farewell...
thank you....love terry
Posted by Terry at 10:40 am 14 comments: Links to this post

Oh Gunnar We Are A Day Late AGAIN! 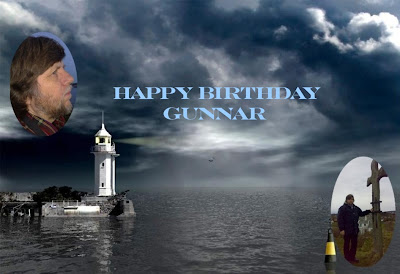 dear gunnar...bernie and i wish you a belated birthday and no one can say it better than your dear felisol'
i am putting here the words she had under your picutre on her blog.
these were written there from her bible one day on the far side of the sea....


. Love
1 Corinthians 13
Love
1If I speak in the tonguesa]">[a] of men and of angels, but have not love, I am only a resounding gong or a clanging cymbal. 2If I have the gift of prophecy and can fathom all mysteries and all knowledge, and if I have a faith that can move mountains, but have not love, I am nothing. 3If I give all I possess to the poor and surrender my body to the flames,b]">[b] but have not love, I gain nothing.
4Love is patient, love is kind. It does not envy, it does not boast, it is not proud. 5It is not rude, it is not self-seeking, it is not easily angered, it keeps no record of wrongs. 6Love does not delight in evil but rejoices with the truth. 7It always protects, always trusts, always hopes, always perseveres.

8Love never fails. But where there are prophecies, they will cease; where there are tongues, they will be stilled; where there is knowledge, it will pass away. 9For we know in part and we prophesy in part, 10but when perfection comes, the imperfect disappears. 11When I was a child, I talked like a child, I thought like a child, I reasoned like a child. When I became a man, I put childish ways behind me. 12Now we see but a poor reflection as in a mirror; then we shall see face to face. Now I know in part; then I shall know fully, even as I am fully known.

13And now these three remain: faith, hope and love. But the greatest of these is love.

Posted by Terry at 8:05 am 5 comments: Links to this post 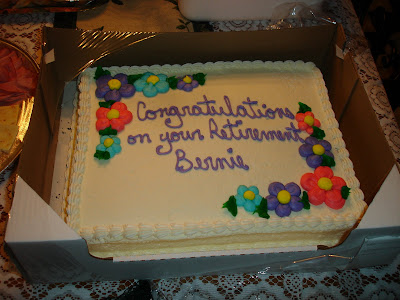 this sunday evening after the gospel meeting our niece rachel had a "surprise" retirement party for her uncle bernie
surprise...ha! mom is definitely not the word in the golden family. happy secrets cannot be kept and well, you must know that mom golden has always been bernie's mom golden too and so the story goes...he read between the lines...no indeed!.. MOM is not the word.
in fact this anniversary cake was picked up by betty and bernie and the little red car a day BEFORE the celebrations!
talk about reading between the lines! 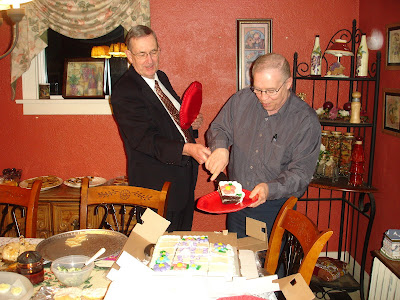 here, bernie cuts off a big slice of cake for our friend doug, and bernie is certainly not stingy! 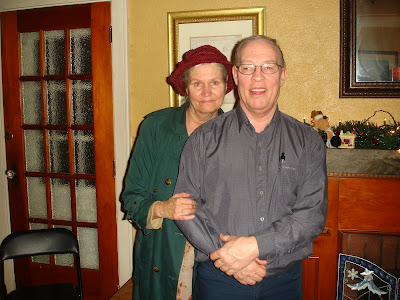 seeing as it is ruby tuesday, i decided to leave on my ruby hat for the occasion.
i seem to look very tired and the reason is that i AM!
that bernie has been a ball of fire since he has retired and i think it will be hard to keep up with him! 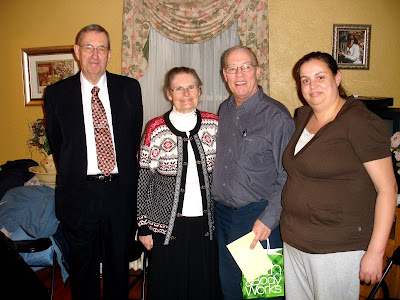 here are our friends doug and leona, good friends who the golden family adopted several years ago and here is our rachel with her arm around uncle bernie. 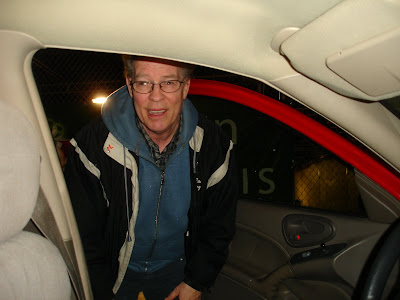 i think that this retirement busness might just be for the birds...bernie and the little red car found out that walmart was opened for twenty four hours and if you are wondering why it is so late that i am posting my ruby tuesday, well it is because at one a.m. the two of them forced me to go shopping!!..and the only thing bernie bought was the 2010 car calender that walmart puts out every year and he bought it for the little red car!...nuthin' for me! 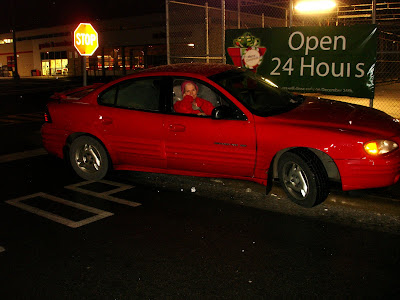 and believe me...it was NOT a pretty sight!

happy ruby tuesday to our pied piper, mary t the teach and to all her followers and all our other blogger friends...every last one of them..... god bless you...love terry

ps... my grandpaw ron...have you still got the jar of "jobs for bernie to do"? i would appreciate it if you would send it to me if you remember where you buried it....!!!