this is one of my favourite southern gospel hymns.
the lord jesus deserves all of our praises for dying on the cross for us, taking our place and his blood washes us from all of our sins.
have a blessed sunday everyone...love terry
Posted by Terry at 10:27 pm 8 comments: Links to this post

Take Time To Smell The Roses?...NOT

dearest amrita, my friend ...this post is for you! 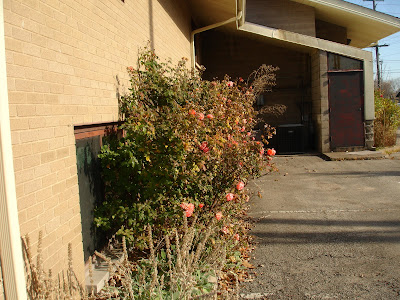 yesterday when mom golden's doctor appointment was over, i stepped into the bright sunny november day to find the little red car which was our ride out!
as i headed toward this medical building i was so surprised to see this rose bush!
so amazing that it was still in bloom and with winter on its way yet! 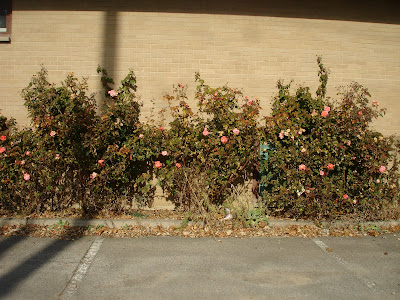 oh! there were several pink bushes! 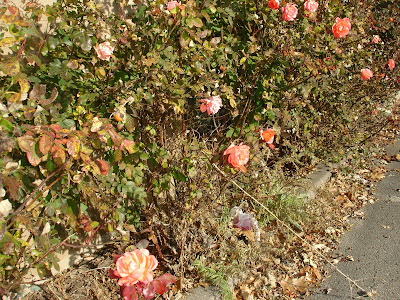 so, so beautiful and so, so still sharing their sweet fragrance! 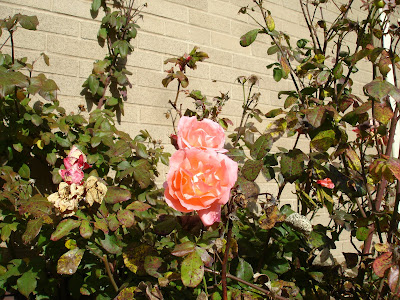 and then i thought of my friend, amrita and i was so glad that bernie had recently charged my camera because now i wanted so much to send these roses to india to her and her mama. 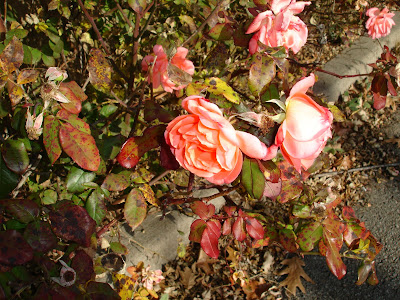 oh aren't they just a miracle of our creator? 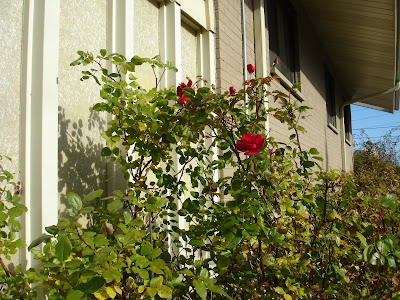 just behind another corner, i spotted a little red rose and it beckoned me! 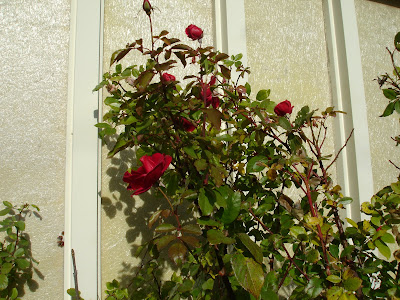 and it introduced me to the rest of the family...oh! oh! oh! 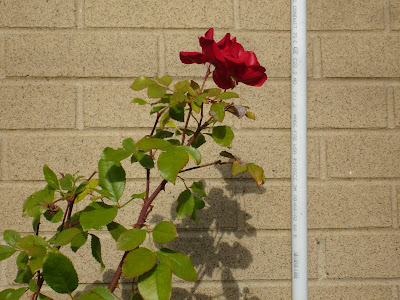 just look at this beauty sunning herself and admiring her own shadow on the wall! 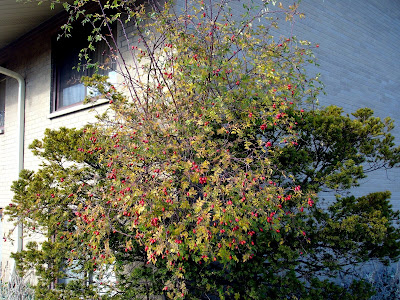 just around the last corner, appeared a bright splash of red berries on this bush.
for sure and i was really happy that i always carry my camera!
click! 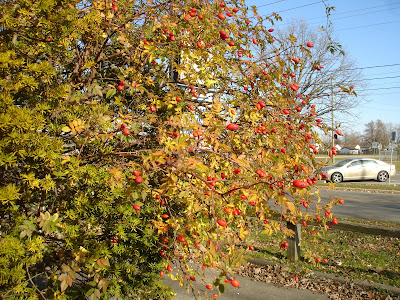 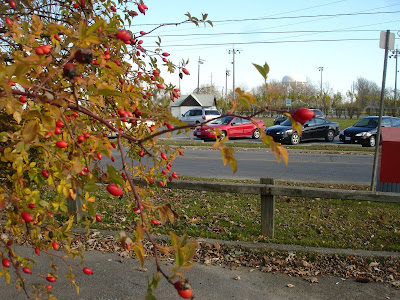 and another!
can you see who is watching me in the distance?
watching me and with a pink paper waving at me in the breeze, and stuck on to the little red car's windshield wipers..NOT a ticket and if so for WHAT? 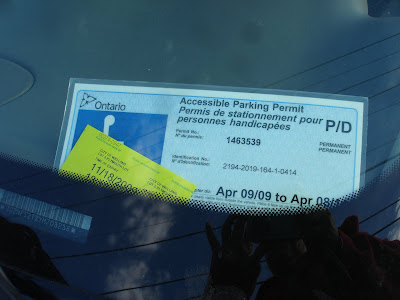 when i reached that little red car or "little red riding hood" as amrita calls it, i was shocked indeed that the paper WAS a ticket!
and you know for what?
well the man had written out that ticket, accusing the driver[me!] of parking in a handicap spot illegally!
the note said that the expiry date could not be seen and so "how do i know if the thing is legal or not?"...oh!
after i picked mom golden up, i hurried right to town and into the ticket department.
i knew mom golden was praying for me as i left her in the little red car.
i told the lady that this must be a mistake and that lady told ME that "no.. it wasn't".
i guess when she saw how upset i was, she forgave and cancelled the ticket.
and then she gave me some two way tape that i could put on my permit. she told me to tape it to the window and always up far enough for the expiry date to be seen by the ticket man..
oh!! if she hadn't of canceled that ticket, it would of cost 300 dollars to pay for it.. almost the WHOLE of my disability check!
i am so glad that the lord answered mom golden's prayer!
hmmmm...though, i really wonder if i should STILL take the time to stop and smell the roses!! 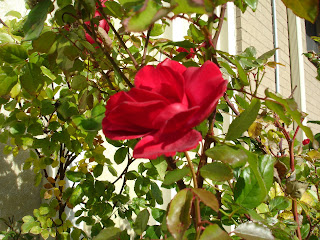 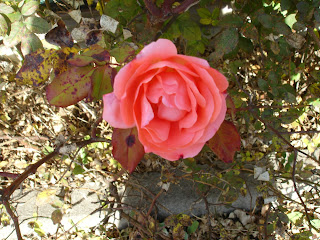 one thing though, i refused to be too upset to send on to princess amrita and her mama these two roses...a pink one and a red one and my wishes that amrita's poor knee aching with arthritis will get better!!
http://yesugarden.blogspot.com/
take care amrita, mama and sheeba....love terry
Posted by Terry at 1:04 pm 15 comments: Links to this post

Coffee Friends On A Ruby Tuesday 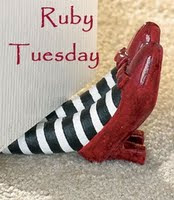 we were so busy this week that we never had a chance to take any ruby tuesday pictures.
but his evening when the little red car took us out for a coffee, we truly hit the jackpot! 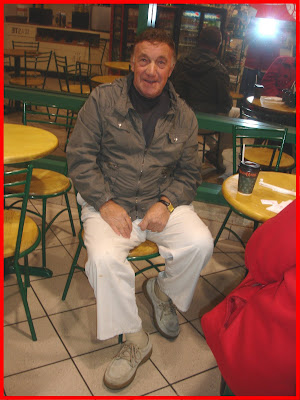 at the grocery store, i spotted this gentleman who we know from burger king.
i had promised him the next time we ran into him that i would take his picture just like i had done for his best friend, vince.
as he was going for coffee, i told him that bernie and i and the camera would be over to see him in a few moments. 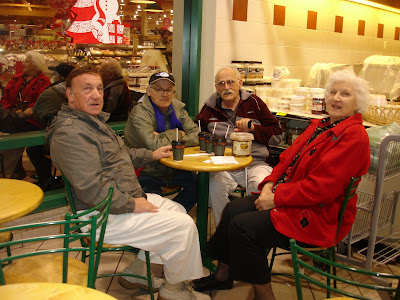 there when we arrived, we saw him sitting beside his best friend, vince and another elderly couple.the pretty lady with her nice red coat was a little shy of getting her picture taken, but the three boys convinced her and wow..i was so glad..just look at all of the reds and rubies! 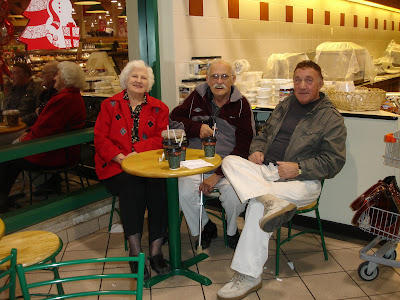 well the little lady must of liked the picture because then she let me take ANOTHER one! 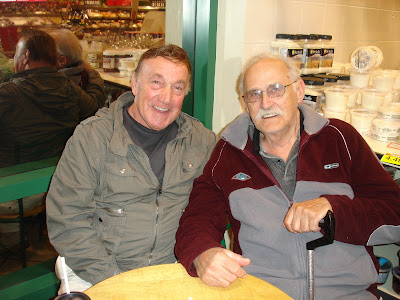 our new friend convinced his buddy to have a photo taken of him and the lady's husband.
really cute if you ask me! 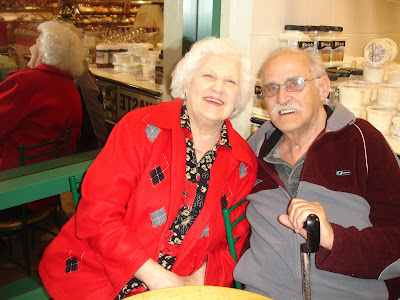 and finally i could hardly believe how fortunate i was when the little lady allowed me to take a picture of her and her sweetheart..i didn't centre the picture because i loved the reflection of the lady in the store window.
for sure and we had hit the ruby red jackpot! 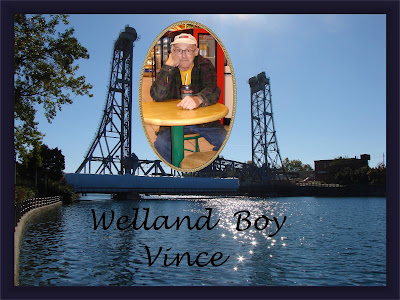 and THIS is what i will make for these dear people....this is vince who a few weeks ago i put the picture of him on the welland canal bridge.
i will just as i had done for vince make them several pictures each, enough to give to their family and friends.
i love to do this so much and i love the happiness that it gives to these precious elderly people who are responsible for working so hard all of their lives and buiding our country into what it is and making it so much easier for their descendants ..these people are the gold of our country!