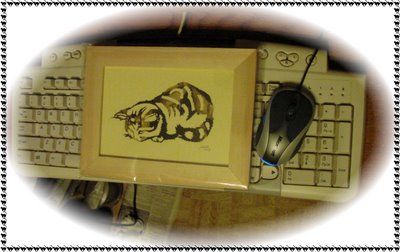 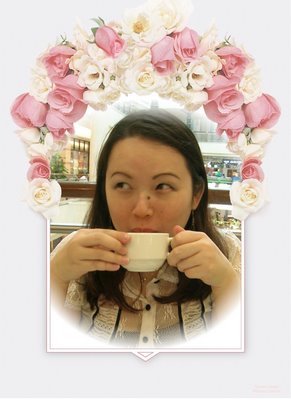 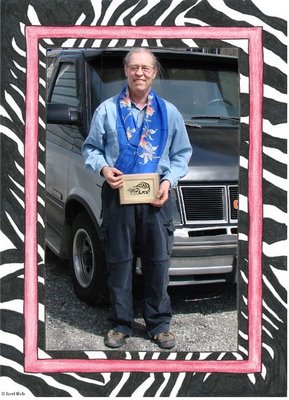 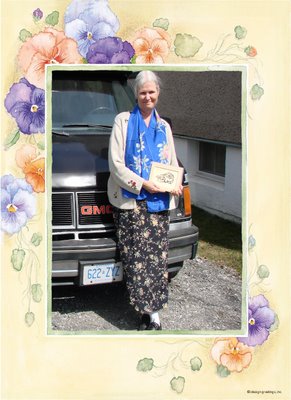 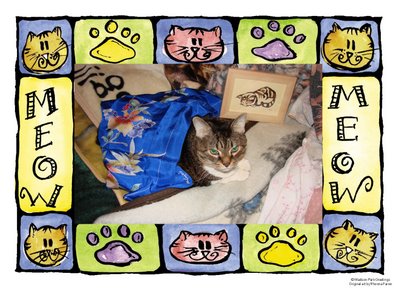 I have been planning to do this certain posting for a while but have been rather on the lazy side these days!

A few weeks ago Bernie and I received some beautiful gifts and a lovely letter from a far country.
Amelia better known as "Dragonfly Wings", is from Malaysia.
She was the kind sender!

I met Amelia through Noel Lewis's blog site and we have been friends ever since.

She made the mistake of emailing me her picture and as you can see I have blogged her, just as I have a few other unsuspecting people from time to time!
[Sabine made me solemnly promise not to blog HER picture, so I will have to keep my word on that!]

Amelia is the pretty girl drinking a cup of coffee.

I have collaged Bernie and I and Bernie's spoiled cat, along with Amelia on the scarf.

Our kind Malaysian friend also sent us a framed cat and Bernie has taken full control of THAT, although tonight during a photo session, that kitty seemed to be wanting to play with my computer mouse.
He makes his home beside Bernie's computer usually.

In fact when I was looking for my scarf this evening didn't that Bernie have it all hung up nice and pretty like on the bedroom curtain?
It is almost spring weather and I think I will wear it with my coat tomorrow to church!

I thank you very much Dragonfly Wings for everything!!....Love from Bernie and Terry and one spoiled cat!
Posted by Terry at 4:54 am

Love all the photos! My spoiled cat Vincent says hello to your spoiled cat!!
:)

Aww... Terry, you give me too much credit. Glad you liked the gifts. Shopper looks totally cosy with the scarf. ;)

Aw! Well wasn't that sweet to send you all those goodies. It's so much fun to get care packages in the mail!

Hope you're doing well Terry!! If I could box up our sunshiny-warm weather, I'd send you some! It's just been lovely around here. I'm going to "Tater Day" with Ty and a friend tomorrow! So we're hoping for more of this summery like weather we're having.

Love from your Kentuckian friends, Jessica, Ryan, and Ty

and it looks like you guys have no snow, plus warm temps!!! lucky duckies! our rain has turned white - um, sometimes called snow, i believe! blah!

Snuggy sends his love and so do I. :)

I love the cat picture, and the pictures of you and Bernie and Amelia. What a sweet gift! Bernie is a good sport. P would never pose like that, even if the Queen of England sent me her crown. LOL!

Hello there Terry!
It has been beautiful weather finally here, but wow there was alot of days there for awhile, nothing but R-A-I-N!! I thought gavin was going to go crazy in this house!!

ANd how's your kitty's doing? Gavin just loves his little "welcro" haha It's funny to listen to him say it!

Hi Terry -- You do good with those collages. "My cat"* would like to play with your cat too, well maybe just sleep in the same place.
..

some cool pictures and a cool friend ya got there!

Just stopping by to speak to you? Thanks for the cool weather you sending to Georgia I been breaking a sweat ever after noon in this 55/85 split in the temps. We going to have 45/70 split in temps starting thursday night. Blessing and ya'll have a good week! Ron.

Nice try RRBJ..."Anonymous" Ha!!...My Sunshine, Jel NEVER signs her comments...
The person that wrote this weak "sorry was a guy named Ron!!...No it will NOT do at all!!!
Talk about passing the buck!......Terry

Terry I only stopped by to send some nice conservation up north to some nice people I thought were my friends and I get chewed out for being nice and that weren't me that wrote that ? Now my sensitive feelings are hurt and on top of that my index finger that is crooked from Arthuritis is not feeling well and I got to apoligize for what someone else wrote ? I am not the type to throw my friends away just that easy without regroping and think this thing out ? Blessing up that way and by all means send the rain , we been praying for rain. We almost got a 8 inch deficit on the rain guage? This is Ron signing off for now but I might be back?

Dear Ron....All is forgiven. After all I just left to the Piigrim's blog.
He is writing about forgiveness.
What can I say?

By all means, visit whenever you want..

I wonder who that anonymous REALLY is...hmmm...Don't that beat all?...from your Southern Ontario friend, Terry

PS Until this whole thing is solved...sorry RRBJ....We will just be keeping our rain here and Georgia doesn't get any!!

that was me that wrote the note !

Terry I want you to go back over to Pilgrims and reread all that He said about forgiveness cause I don't think that when you forgive someone you are not to carry a grudge ! You said " untill this whole thing is solved we will just keep our rain here and Georgia doesn't get any ! Praying that you will change your mind we need rain? Blessings to you . Ron. PS. I've never been to Canada but are all the women folks mean as you ?

Thanks Janice for clearing this up ? I guess we blogged at the same time ? Janice you are just proving that you are American Made ! Blessings to ya'll. Ron.

Yeh Ron..There are a few and I am married to one of them...she is even jealous of my cat!!...Bernie

Thanks bernie I will beware If I ever visit Canada ? Hang in there bernie you got to much invested ! Blessings . Ron.

Hi Terry, looks like you've been having fun! Blogging is so much fun and such a blessing, isn't it! Wishing you & your family a Happy Easter!

Hello Terry, GOOD MORNING hope you feeling better today, and you shouldn't have been rude to my friend Ron. He is such a nice guy and loves everybody ! I hope you have a good day ? Grandpaw !

hey terry!
I just wanted to know if you also wear hats much? There is a lady at our church that reminds me of you SOOOO much and she usually always wear's a hat.. sometimes a sun hat, but i thought if terry wore a hat, i bet them too would look just alike! funny isn't ?? I'll have to get a picture of her and post sometime! :)
love from velcro and gavins house! ~ Amber ~

Grandpaw I sure do appreciate them kind words Cause for awhile I thought I was in a losing situation ? I'm glad you took up for me ? Blessings to you . Ron.

What lovely pictures! You look very happy. I would love to meet some of my blogging friends!