The Fat Lady Bites The Dust At The Welland Fair 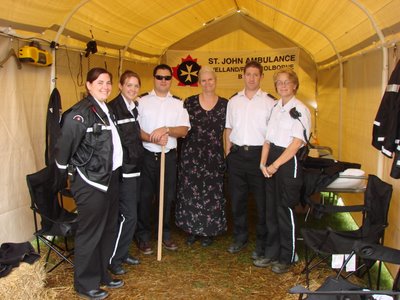 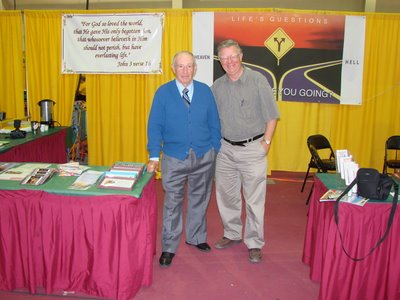 I had been planning today to put a different posting in and I had big plans also to read a few of my new friends blog sites that I have met in "Blog Land"..
No such fortune though.

The Welland Fair is going on for the next few days and the Christians and two visiting preachers have set up a gospel booth.

Well it just happened to be my turn to bring in the lunch for the men.
Now this was fine and dandy. I didn't mind at all!!

After I entered the fair gates, I was talking to a few people before I delivered the dinner, and incidently taking a few pictures, but as I said my farewells to these new friends and proceeded on my way, I had only gotten a few steps and all of a sudden I tripped head over heels, arms and legs flying and as my head hit the ground I literally bit the dust!!

How embarassing!! Food flying,camera flying and ME flying and landing all over the place!

To make a long story short, one of the new friends I had met kindly picked up the box of food which had miraculously STAYED together, and a young fellow picked ME and my camera up.

Another young man took me and the box of food over to the Gospel Hall site where much to my dismay I met Grampa Yade.
I told him I was perfectly alright but he insisted on my seeing the paramedics, and Grampa Yade's word is LAW!

Ha! After the young people had patched up my leg and even though I was in hurt,pain and agony and terribly embarassed, I asked if I could take their picture.
Well didn't that Grampa Yade grab my camera,and take a group picture with the patient standing right in the middle of some of the nicest young people she had ever met!

That is them in this picture; The fat lady in the middle is me!!!

The two men in the second picture are Grampa Yade and the visiting preacher..

Well it is off to bed for me now. I have to go and lick my wounds and be ready for a ten hour shift tomorrow at the palace!
Posted by Terry at 12:08 am

Well bless your heart girley! You better be careful! I hope you feel allright. Glad your food made it through the tumble so you weren't hurt AND hungry! :) Have a wonderful day! Jessica

Have a great day!

Now don't be saying silly things like you are fat...no you are not and I won't stand to hear you say that!

Glad to hear that you are okay...I know what it's like to take a tumble when people are around...the only thing that gets hurt is your pride!

God has a sense of humor you know, and maybe your trip was His way of letting you meet some new people you might never have met! Besides, how many "patients" do you think the paramedics have their picture taken with! :)

Next time you take a trip like that...send a postcard!! Bwah ha ha ha! Sorry...couldn't resist that!

Ramblins of a middle-aged goddess said...

Gracious. I hope that you are okay now. What a TRIP!! huh!! Just trying to be nice and fall. Sounds like something that I would do...AND you are not FAT!! Nice to see a picture of you. We are still in Illinois and going to be leaving to go home this Tuesday. Having fun seeing our daughter and her family. If you have been reading my blog you will see we are being silly and having fun here.

My goodness, Terry!! I'm glad you weren't hurt! (Except for the leg that the people wrapped up!) I guess that added some excitement in your day! :) Hope you're not stiff and sore!!

well don't "lick the wound" ... you know what they say about germs!! seriously - hope you are feeling better this morning!

just getting caught up on your posts ... i love the fall pics and your mom's hats! :o)

blessings on your week!

Terry, I'm sorry to hear you had that fall and in public...looks like you 'fell' into good hands though...smile. You look very pretty and I love your dress... HOw good of you to fix a meal for the men and how refreshing to see John 3:16 in the Gospel Hall tent. I love how Jesus seeks us all and longs for us to accept him. We go through life thinking its all about us but its really all about Jesus and God and how holy and loving they are. ...and, I love the name of your bookstore...'Chapters'. Thats a good fit for a book store..=). Ours is named 'Barnes & Noble'...and I love to go there and just browse to my hearts content. Saying a prayer for you that your hurts and bruises will heal well. Its always nice to get your comments...blessings to you!

Aww...Terry.. I hope you're feeling better now. I knew of your fall when it happened b/c you had posted a mes. on one of my fair pictures! I'm glad there's ppl in the world that are nice enough to help somebody up that had fallen.. ya know? Well Get some rest!
Keep in touch! ~ Amber ~

Some people fall for anything...

Others fall at the fair. That's why they call them Fall Fairs.

Julie told me how to COMMENT on my friends Non-BLOGGER-beta sites. Just comment as Anonymous. Now you have to deal with my corny comments.

Be encouraged today, dear sister. We're closer to "home" and Gabriel is beginning to moisten his lips.

Standing on His promises,

Now David..You had better behave yourself or my friends will gang up on YOU!!...from Terry

Terry, you are just so sweet...laying on the compliment about my collage ....thanks though! Seriously, I would like to learn how to improve...I'm flying blind (sort of)...just doodling and having fun.

What a hilarious story...embarassing to be sure, but a great one for the books! I love your drama! Makes my blonde moments not feel so lonely. hehehe Take care!

Hi, My name is zrahl...take that back...actually on my good days, when I can type, it's Rachel!(friends of Jess and Amanda)
Your story was hilarious and a little on the painful side...I'm sorry to hear about the fall.
I am just now sneak'n a peak on your site from Jess' links. I also grew up in Canada. I was born in Inuvik,N.W.T., but I grew up in Brandon , MB. Well, Id better finish my blog browsing . I just couldn't resist a temp. stop when I read this story!
God Bless You,
Rachel Norwood