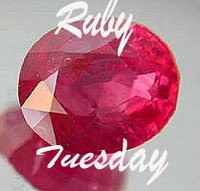 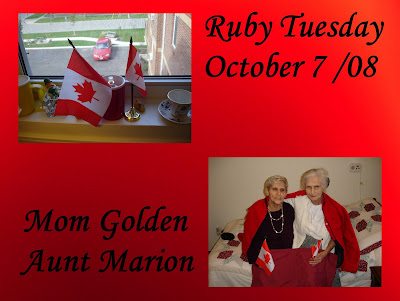 This Friday I packed Mom Golden and her walker into the little red car and took her to see her sister, Aunt Marion who lives in a retirement home.
The two sisters have not seen each other for quite a while as Mom Golden was too weak to travel far, and then Betty was needing our attention for a few weeks.
So, needless to say, they were quite happy to see each other!
In this picture I covered them with my red jacket and put a ruby cloth on their knees.
To finish off, I put a little touch of red in each of their hands, a tiny Canadian Flag.
Aunt Marion has several Canadian flags in her room.
Two of her grandchildren have fought in Afghanistan.
Aunt Marion has nine children, twenty six grandchildren and 28 great grandchildren.
Mom Golden has nine children, twenty six grandchildren and only four great grandchildren.
I placed Mom Golden's and Aunt Marion's picture into a photo that Mom Golden had taken with her own camera.
She had made a mistake and zoomed her lens into a red wall.
Therefore the resulting picture was just a large red square.
This made a perfect background for these two pictures.
I think that when I show her this picture, Mom Golden will be quite pleased that she has shared in the creating of it! This is Mom and Aunt Marion before I Ruby Tuesdayed them,!
Posted by Terry at 12:38 am

Dear Terry,
you are so wonderful creative.
How marvelous you planned to honor the two sisters, your Mom and your aunt. They sure deserved it!
Beautiful and bountiful, bravest of women.
Have a nice Tuesday and as always; Go with God.
From Felisol

Very creatively arranged Terry.I 'm still trying to figuer out how to seat Sheba on the throne.

The two ladies are priceless rubies I should say.

And there's that little red car once again placed strategically in the photo ... you really are quite creative this week ... not to put down that Bernie fellow last week ;) ... I'm just a saying ... v.e.r.y. c.r.e.a.t.i.v.e.

they are lovely ladies and you are a wonderful daughter/niece

Your a GREAT DAUGHTER , TERRY !

Always so thoughtful of family and others --

Blessings to U Dear Terry

You're a very good daughter and niece =)
Take care.

How sweet of you to get them together! And red is one of my favorite colors!

Nice to see Mom Golden getting out and about! She reminds me of some of the sweet little old ladies that come into my office each week, so cute!